Back to the top

For more than ten years I have worked as musical director and stage musician in the independent theater collective werkgruppe2. In documentary projects, werkgruppe2 attempts to describe social reality from the perspective of people belonging to social minorities; the invisible, the excluded. Based on detailed, journalistic research, atmospherically and narratively dense productions emerge, which open up the boundaries between drama and musical theater, documentary and fiction.

The music, which is live in each production, usually consists of new compositions for different ensembles and often unusual sound sources. With instruments and sound-making objects, musicians and actors can turn the theater space into a sound space. On stage, the music stands on equal footing, commenting on and differentiating the topic of the research and the work as a whole.

The focus of my work to date has been documentary films – I am interested in how artistically elaborate the music can be when set against images that show the facets of a reality. Again and again this means exploring the tension between the documentary’s authenticity on the one hand, and on the other, the possibilities of the music while always respecting the dignity of the protagonist. 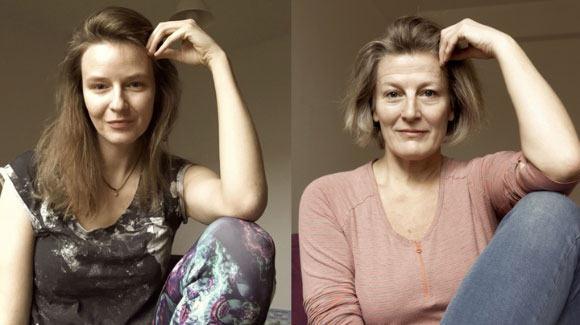 The next international werkgruppe2-production WORKINGWOMEN, which would have had its premiere at the Ruhrfestspiele on May 28th 2020, has been postponed.

“It is a sensation that the almost two-hour balancing act with its enormous height of fall does not even stumble once (…) It is exciting – and probably more than political theatre can even hope for.”
taz, 1.3.2020

As soon as the state theatre Oldenburg can resume its performance, further performances of SURVIVING will be scheduled, which has so far only been shown at the premiere so far.

“The theater collective werkgruppe2 interviewed ’68ers and their children for the documentary piece “Our Parents’ Bonds”. From the answers, director Julia Roesler and her team distilled a moving text with a clear message: the legendary rebels often seem to have been lousy parents.”

Me and the Donkey